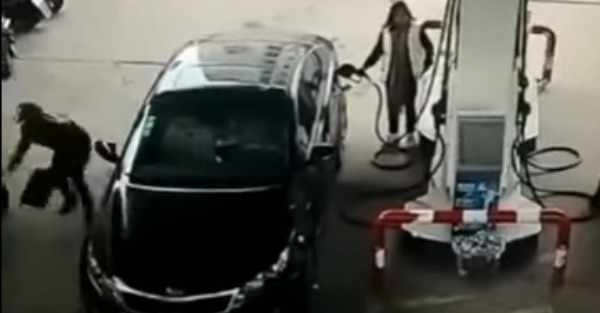 He didn’t think it would turn out this way. The hard part was over, he had successfully lifted his target, all that was left was to drive off and count his reward.

Driving off turned out to be harder than he thought.

This Live Leak video (via Youtube) shows a man in black ever-so-carefully get off his scooter and steal a purse from a woman’s car. She doesn’t see him as she is pumping gas. The thief, in all his stealthy glory, gets back on his scooter and speeds away for a clean getaway.

Only it wasn’t clean.

Within seconds, dude crashes into a wall.

The YouTube description says he was arrested. I wonder if he was charged with terrible driving and overall stupidity?

Related: [VIDEO] Idiot Car Thieves Wreck Three Hellcats After Barely Driving a Mile Away From the Scene of the Crime