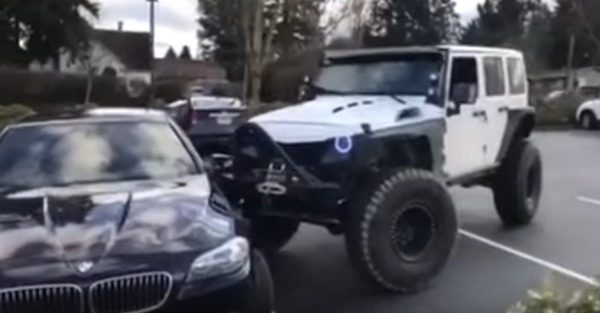 Don’t you wish you could dispense parking lot justice to people who can’t park inside the lines? These guys sure do. They fantasize about putting bad park-ers in their place so much, that they staged this little demonstration showing that Jeeps rule and BMW’s drool.

They should have taken some acting classes first though. “Go record, I’m about to do something,” the driver says to his passenger who is conveniently already recording and fixated on the car that is about to be on the receiving end of the “something.”

So of course they push the BMW into the parking spot and spark the countless arguments of who’s the bigger jerk: The BMW driver who is too important to park properly or the Jeep who thinks a bad parking job deserves physical damage.

In reality, it is everyone involved in staging this… prank? While the bad acting and camera work that doesn’t show the BMW’s quarter panel before the push is suspicious, Jalopnik noticed the most damning evidence:

A skid mark indicating this is not the first time this BMW has been slid sideways. Whether the Jeep pushed the BMW out of the spot in the first place, or that was the remains of a practice push doesn’t matter. A video on the internet turned out to be dishonest in some way.

We’re as aghast as you are!

Related: BMW driver does nothing to help stereotypes