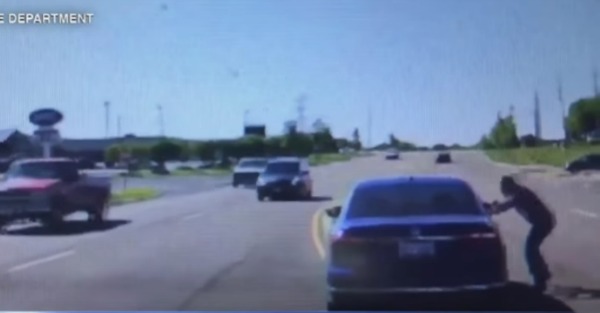 When this cop began tailing a car for driving erratically, he had no idea what he was about to witness. From the cop’s perspective, this could have been anything from a daytime-drunk driver to a person with their nose buried in their phone, but Randy Tompkins saw what was really happening.

Tompkins was in the truck and, when faced with a car slowly driving down the wrong way, was able to see into the car and notice that the driver wasn’t ignoring the police behind him, but was instead having a seizure. Since he saw what the cop had no chance of seeing from behind, Tompkins took matters into his own hands.

He jumped out of his truck and into the open passenger window of the car. He was able to put the car into park to bring it to a stop and then the police called for medical help. Without his quick actions, this could have ended so much worse. Great job, Randy.

Related: Hero on a German highway caused a wreck to save a stranger’s life