Suspect gets rewarded for a wild, hour-long pursuit with a vicious beat down 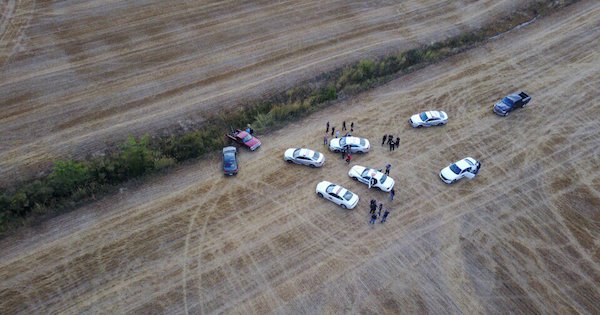 As always, Police don’t like being made to look like fools. This was exhibited again today after an hour-long car chase, spanning two states, ended with fists and boots in an Indiana field.

The suspect, who has yet to be named, was allegedly involved in the theft of several purses from a Kentucky gas station. And so the chase spawned. That’s right, an hour-long car chase that crossed state lines originated over the alleged theft of a purse.

The chase crossed from Kentucky into Indiana, and even took a brief detour to drive around an empty Indiana University parking lot; it’s important to see a variety of scenery when touring a state.

The whole chase concluded with a cadre of Keystone Cops surrounding the pickup in an empty field before pulling the stranded driver out of the car and giving him a thorough beating just in sight of the hovering news cameras.

Sure the cops were probably embarrassed after driving around in circles for an hour, but how many police does it take to cuff a surrendering man?

Related: Suspect rolls his car, ends up back on the wheels, and keeps going in a wild police chase