Road rage turns violent and ugly, and gets worse when a gun comes out 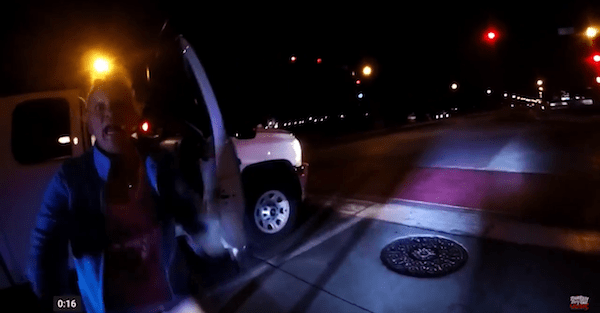 A man was driving down the road when someone from a white truck in front of him allegedly started throwing beer bottles from the vehicle.

The man behind the truck was on a bike, and he stopped and started recording. The passenger of the white truck got out and began berating him, and the incident escalated from there. Some of what happened is difficult to see from the video, but it’s not hard to see that tempers were flaring between all parties involved.

Related: A video emerged of a horrific road rage incident involving two men and a club

The man who claims he was assaulted uploaded the video on his YouTube, and he said in the description that the passenger assaulted him.

You can also hear the woman yell, “You pulled a gun on me!”

It’s hard to know all the details of what happened since the video didn’t capture everything, but it was certainly an ugly incident.

I was hesitant to post this video what happened to me and my brother about a month ago. We were driving down a road that always has sprinkler systems on and it causes big puddles along the roadway so we slow down to a safe speed so none of us would wreck while we were slowing down a white pickup started throwing beer bottles and swerving at us my camera was about to die so this is the only thing I got. While attempting to stop the white pickup swerved and the passenger of this vehicle got out and assaulted me before the truck was even parked and the rest is history. I’m sorry for the cussing but my blood was boiling..