Cops find a stolen Porsche, but the owner probably isn’t going to want it back 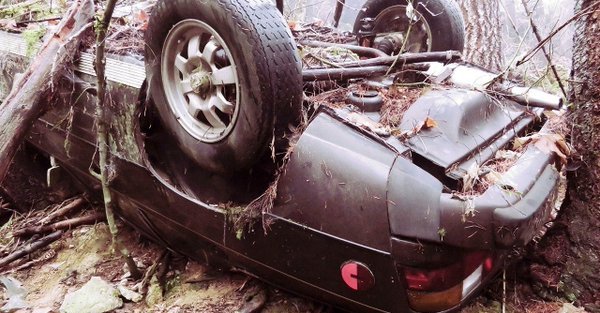 It’s a bittersweet holiday season for the Oregon owner of a stolen Porsche. The good news is the Porsche was found and is ready to be returned home, the bad news is that it’s unclear if the owner will even want it, considering it’s current predicament of being tossed down the side of a mountain.

Jalopnik reported that the Porsche was originally stolen in 1991 from a parking lot in Medford, Oregon. Police were only able to recently locate the car, after a crash was reported by a man who had followed his dog off Abbott Prairie Road near Crater Lake.

The local Sheriff’s Department was able to confirm that it was in fact the car from 1991, and that it had been resting at the bottom of the hill for some time now.

“Heavy forest debris indicated the vehicle had been there for a significant period of time. The registration tags expired in 1991. Further investigation found the Porsche was reported stolen on January 20, 1991, from the parking lot of the Southside Cinema in Medford.”

Removing the car will be a serious challenge because of its location, so officials are assessing the best plan of action for moving forward.