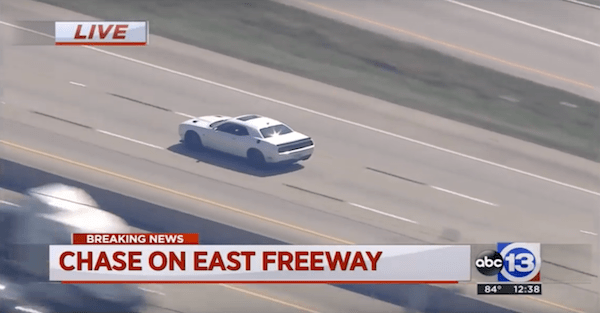 In Jefferson County, Texas a 25-year-old man took police on a wild ride down the I-10 east freeway. His weapon of choice, a Dodge Challenger Hellcat of course.

Mohamed Ahmed Abu-Shlieba, allegedly stole the Hellcat and didn’t seem too keen on letting it go. The chase started off in Houston and according to KSAT, he was driving at speeds well over 100 mph. Eventually Shlieba bailed out of the car and ran off into a field. According to the abc13 reporter, Shlieba saw that he had only 18 miles of fuel left before deciding to abandon the car.

Shlieba was immediately arrested and considering this man has multiple felonies, he will be put away for a long time. Thankfully, no one was hurt and the Hellcat seems to be in one piece.

Check out the video and listen to the way the reporter says “Dodge.” This guy is defiantly not an enthusiast.