Stoplight donuts are just asking for a dose of karma 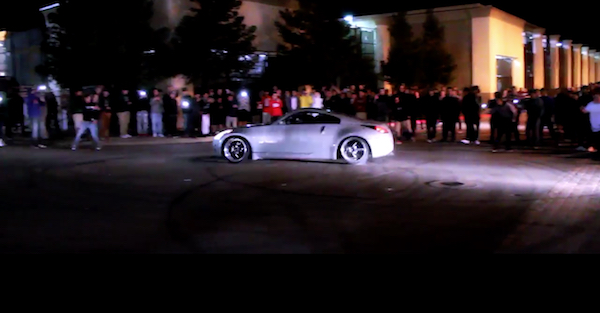 Streamable
[protected-iframe id="733fb388b6c2f4f895f9f7c2dabc4166-117130527-119693691" info="https://streamable.com/s/mapj2/pdzytx" width="100%" height="100%" frameborder="0"]
Time to outline some poor decisions, so, alright, let’s do this.
It’s generally a really bad idea to pop some doughies in the middle of an open intersection. Yeah, you look cool to all your friends milling around the edges of your kaleidoscopic motions, but you’re seriously risking potentially killing or harming yourself or others, speaking of which . . .
It’s a really bad idea to run out in front of a car doing said doughies. This is a car, it’s made of plastic, steel, and other metals. You are a person, made of skin and mistakes. Place a person in a head-on with a car and don’t be surprised with the result. Sure, the guy above was trying to warn the driver of impending fuzz, but the argument should be made that that ship had sailed, and he only succeeded in potentially causing some serious self-injury.
At the end of the day, you’re probably going to get caught doing this, so if you do, just take your punishment and get on with your day.