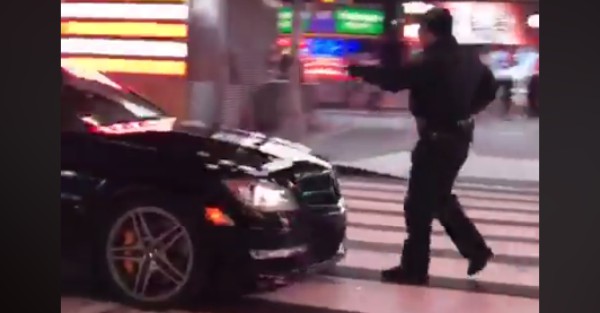 Something about a bunch of power and a crowd brings out the absolute worst in people. This Mercedes AMG C 63 driver is a perfect example.

After an embarrassing one-wheeled burnout, the AMG driver is busted by a cop in Times Square. Instead of just admitting defeat and paying a fine, he decided to add assaulting an officer with a deadly weapon to his eventual rap sheet.

We have to say eventual because, unfortunately, this idiot temporarily got away. After nearly running down the officer, the driver took off, possibly sideswiping an entire line of traffic before disappearing.

We are glad that the officer seems ok, and we are also glad that it was caught on video so that there stands a very good chance the driver will be brought to justice.

Remember, this guy is in a $60k+ car, he probably would have had no problem covering the fine for a burnout.

Related: A suspect made the most insane decision to try to evade police