Driver with a death wish turns his steering wheel into an entertainment center. Yeah, he got busted. 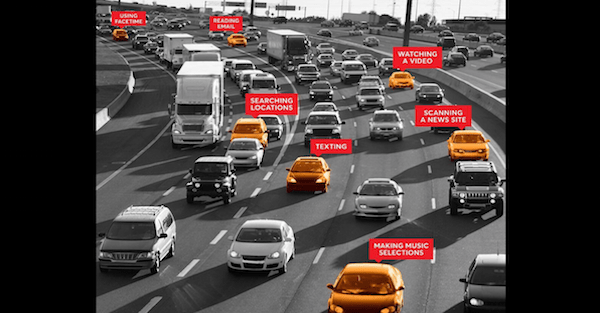 Driving a car in a big city can be a challenge. Its congested, people are in a hurry and the level of concentration needed, is far greater than your leisurely drive down the open freeway. You would assume people would want to be on their A game when doing this type of driving, and then there’s this guy.

Vancouver police recently ticketed a man for using his cellphone while driving his car. Oh, and he was also using his tablet at the same time, and they were both strapped to the steering wheel using string. It couldn’t get more distracting to drive this man’s Lexus, unless you had four 5 year olds fighting over who gets the last animal cracker, in the back seat.

The police gave him a break and only ticketed him for not carrying his drivers license. The ticket amount was $81 which pales in comparison to the $368 ticket for distracted-driving.

According to the Vancouver Sun, a Vancouver police spokesperson said this:

“Just when I think I’ve seen everything, a photo like this is captured by one of our officers. We are reminding drivers to leave their devices alone while behind the wheel. And although our officer felt education was appropriate in this incident.”

Its unclear what the man was doing on two devices at the same time, but his response was that they needed to be strapped to the steering wheel so he could shift gears. Nice try dude, nice try.