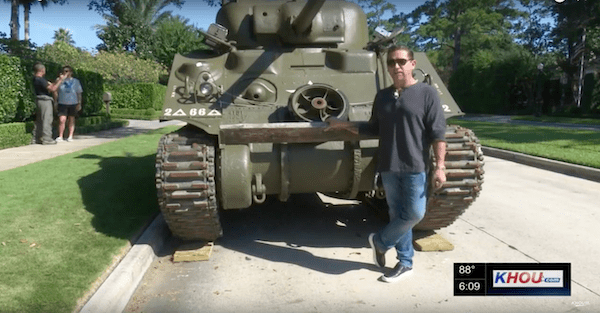 This is the story of a man named Tony Buzbee. You see, Tony likes World WarII tanks and Tony happens to live under the rules of a home owners association. You can probably see where this is going.

Buzbee, a well off attorney who lives in a Texas neighborhood called River Oaks recently acquired a tank. He bought the fully restored World WarII tank for $600,000, and needed to temporarily park it on the street before it was transported to his ranch. Now, its important to understand that this is a pretty small tank and doesn’t take up much more room than a large pickup truck. While parked in front of his house its received nothing but compliments and has been generally accepted by everyone in the area. Despite all this, the HOA has called the tank a “safety issue,” and that it “impedes traffic” and causes “serious concerns for neighbors.”

They want Tony to remove the tank and after watching this video, its clear they’re just out to bother someone for no reason.

Tony isn’t worried at all, saying this according to khou.com, in the video above:

“The problem is there is no action they can take. They can ticket it or they can try to tow it, but the truth is unless I decide to move it, it’s not going anywhere.”