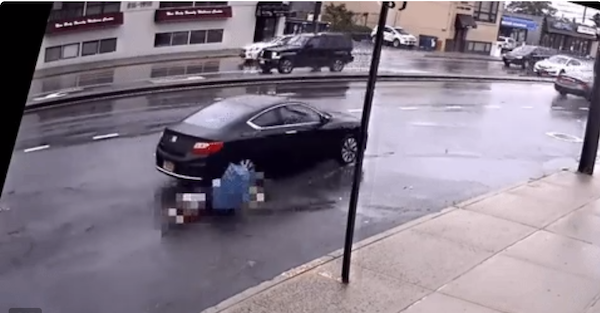 A 62-year-old woman was hit by an unlicensed driver and dragged down the street on Staten Island, and the suspect was finally caught and arrested, according to the NYPD and based on a report in AM New York.

The police account of the incident said the driver, 22-year-old Beatrice Tchoungoua, drove through a stop sign,  hit the woman, and fled the scene.

The video of the incident is below, but be warned, it’s difficult to watch.

The unlicensed driver who ran over a 62-year-old woman on Staten Island was arrested, police said https://t.co/CHWP2M4AOc pic.twitter.com/9kIFm0zDx9

Related: Man sets a car on fire attempting to flee a hit-and-run

The victim was taken to the Staten Island University Hospital in serious but stable condition according to the police.

It took police a few weeks to catch the suspect, but they found her due to the video catching her black Honda Accord.

Tchoungoua was charged with failure to stop at a stop sign, failure to yield to a pedestrian, and leaving the scene of an accident, according to AM New York.