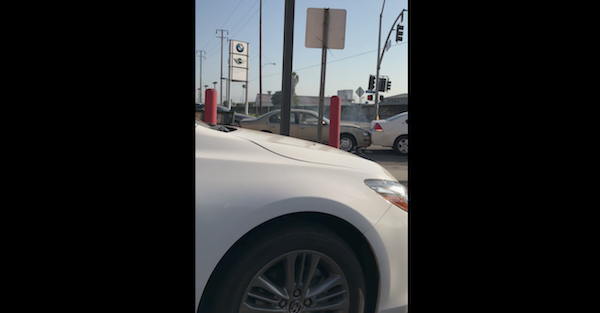 Heading into work, Gus Juanillo saw a man driving a 90’s Nissan Maxima rear end a Chevy Impala in a harmless fender bender — except the man driving the Maxima attempted to speed off, but he was having trouble putting the car in reverse.

Once the man finally got the car out of neutral and in reverse, he backed into another car. Then he hit the Impala again before the car was stuck in neutral once more. After a couple of minutes, the driver takes off and flees the scene.

Related: A 16 year old car thief crashed into the last place he wanted to be

ABC 7 News picks up where the video left off in reporting the details, and the driver reportedly hit a total of five cars before police arrived on the scene.

When the police arrived, the man’s car was on fire an inoperable.

The man was hospitalized with injuries before being booked into jail.

Imagine seeing all of this on your way to work on a Monday morning. That’s not exactly how you plan to start off your week.