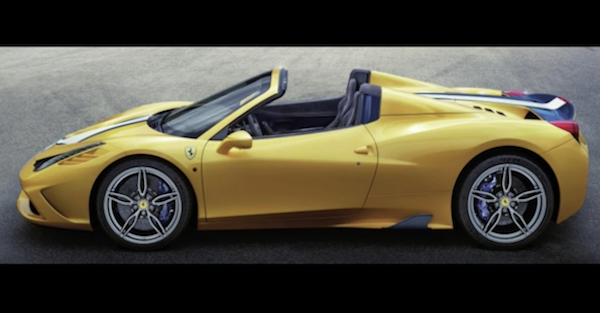 Valet drivers have a pretty simple system. You drop your car off with a driver and receive a ticket with a specific number on it. They put a duplicate ticket in the car or with the keys, so they remember who the car belongs to. When you are ready to leave, you to hand them your copy, and they bring the car around for you.

This system is supposed to prevent what happened at the Vinoy Renaissance St. Petersburg Resort & Golf Club last July, but it didn’t. According to tampabay.com, a man and woman drove off in a yellow 2014 Ferrari 458 Italia Spider after claiming they had lost their valet ticket.

The owner of the 562 horsepower Italian sports car has filed a lawsuit against the Vinoy and its parking operator, 717 Parking Enterprises claiming negligence and gross negligence. James “Skip” Fowler, 73, a senior partner at the Orlando law firm Fowler, O?Quinn, Feeney & Sneed says he “spent significant sums” on inspections, repairs and legal fees and that his car’s value has been diminished.

According to tampabay.com, the man told the valet that he left his ticket in the car and that they’d bring it back. This part doesn’t make any sense considering the valet could have just looked in the car for the ticket himself. Not to mention that the owner’s ticket should have never made it back to the car in the first place.

The valet said he “seemed to be impatient” and “demanding,” so he handed over the keys. After the couple sat in the car for a while, they drove off. The driver was identified as Levi Miles, 28, and the passenger as Chloe Rimmer, 24 and they were pulled over about 30 minutes after stealing the car when the arresting officer noticed the tail lights didn’t work, and that the driver was having a hard time driving. Cocaine was found in the car and marijuana in Rimmer’s purse. Both were arrested and placed in separate police cruisers.

At first, Miles stated the car was his but then changed his story saying that he didn’t steal it since the keys were handed to them. Miles was charged with grand theft auto of more than $100,000, possession of cocaine and driving on a suspended or revoked license. Rimmer was only charged with possession of marijuana as she claimed they had just met and she didn’t know it wasn’t his car.

Rimmer said she did think it was odd that Miles didn’t know how to drive the car, but she didn’t think much of it. Yea that sounds legit.

Related: When The Valet Joyrides Your Aventador