Cop-Zilla is here to take you down 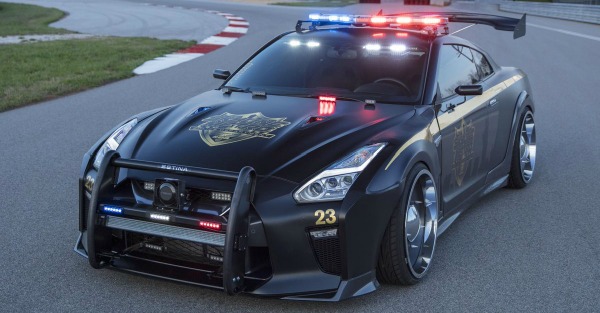 Many questions run through your mind when you get pulled over by the police. What did I do? Do I have my insurance card on me? Did they see how fast I was going a couple exits ago? Is that a GT-R? Wait, what?

That?s right. If you are in New York later this month you might just see Nissan?s one-off 2017 GT-R Pursuit 23. Interestingly the 23 refers to the pronunciation of Nissan. Two being ?ni? and three being, you guessed it, ?san.? Created by Nissan for the New York Auto show this very special GT-R has received just a few slight modifications. And by slight, I mean ridiculously extensive.

Looking like Need for Speed Most Wanted come to life… the @Nissan #GTR Pursuit #23 is here to police the SKYLINE METRO #NYIAS #GTRLAW pic.twitter.com/0fgtqqKp9A

Nissan?s vision for this car is a pursuit vehicle for the Skyline Metro Police. Sure, that?s all made up but as someone who always dreamed of being pulled over by a B4C Police Camaro I?m going to let my imagination run wild with this one.

Sporting a large push bar up front, wide-body fenders, massive rear wing, lights galore and some scary looking wheels this screams ?guilty until proven innocent.? And with the front message board and loud speaker system the lucky officer behind the wheel can literally do that.

Not many mechanical enhancements were needed to brand this beast ?Copzilla.? The latest version of Nissan?s awesome Twin-Turbo 3.8 litre V-6 packs a wicked punch with 565 horse-power and to set the GT-R on the floor, a coilover suspension was utilized.

Also, being shown with Copzilla will be the new GT-R Track Edition. The track edition will fit nicely in-between the GT-R Premium (which is basically the base model now) and the GT-R Nismo which is the top of the line, $175,000 version.

Although the GT-R Pursuit 23 won?t be used by any real police departments, it sure does look promising for, I don?t know, a future Robocop movie? Hint, hint Hollywood.

Related: Police bring out the Humvees to battle a blizzard