Car surfing is the logical end to automation in cars 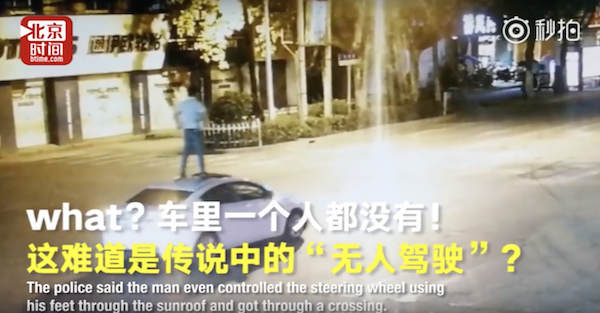 We all celebrate big accomplishments differently. Some go out for drinks, others buy themselves something nice and some people just get up on top of their cars while they cruise down the street.

According to the Peoples Daily, a man in China was arrested for letting his car drive him around while he stood on the roof. The man just closed a big business deal and his pride shows in the way he stands on the car. Hands to his hips, head held high as if he was on top of the world. Which he was, for about a third of a mile before police arrested him.

According to the police report, the man was controlling the steering wheel with his feet through the sunroof. Fully autonomous cars are banned in China so most likely this car had automatic braking in conjunction with adaptive cruise control. When he spotted police he attempted to get back in and drive away.

The man is was charged with DUI and reckless driving. He faces up to six-months in jail and a lifetime of embarrassment. Let’s hope that big business deal doesn’t require him to be around for a while.