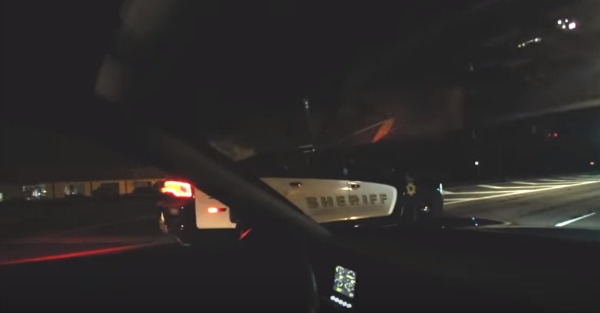 https://www.youtube.com/watch?v=IaZC-ha6C1A
Watch out, there’s a new Sheriff in town and he loves street racing?  This Sheriff must be a gear head as he pulls up to a turbo RX7 and says: “do something cool.”  Say no more. The RX7 does a quick full throttle pull right next to him. We don’t like to condone street racing, but apparently this officer is ok with it. A little wave good bye and its game on a for a drama free night of roll racing between a Mustang, an RX7, an Evo and… a 650 horsepower Saturn? The Saturn was presumably chosen for its dent resistant doors.

First the snake skin wrapped 03/04 Cobra with 700 horsepower takes out a 2JZ RX7 who also has 700 horsepower.  Then we see this crazy Saturn beating a tuned Evo.  The Saturn does get its dent free doors blown off by that Cobra, but hey what do you want it’s a freaking Saturn.
Wonder what that Sheriff has in the garage?
Related: Luckiest street racer alive gets trolled by a sheriff in an F-250