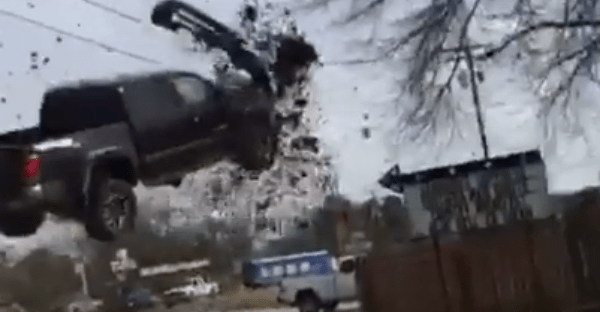 WATCH THIS: Wild ending to a high speed chase in Webster Parish. The man behind the wheel, now in custody, is an escapee from Caddo Parish. (courtesy Caleb Gallups) http://www.ksla.com/story/34627647/caddo-parish-inmate-involved-in-high-speed-chase

An inmate who escaped from a work release program thought he could flee police, but instead his stolen pickup went airborne in one of the most insane sights you’ll see.

KSLA-TV in Shreveport, LA., reported the escapee reached speeds of 115 MPH during the chase.

The TV station reported that after the truck went airborne and cleared a fence, it  landed on a Toyota Carolla that was sitting in a restaurant parking lot — that had someone inside(!!) Let me repeat – someone was inside that car. The Toyota was smashed as if someone stepped on a sardine can.

Stunningly, no one was seriously hurt.

The woman who was in the car, Barbara Harlon, told KSLA she climbed out of the passenger door.

“I felt around to see if I was hurt and could tell that I was okay,” Harlon said. “God was with me.”

She got that right.

Kevonte Dekorey Austin, 18, was back in custody following the chase. He was in jail on a car theft charge and a probation violation, KSLA reported.