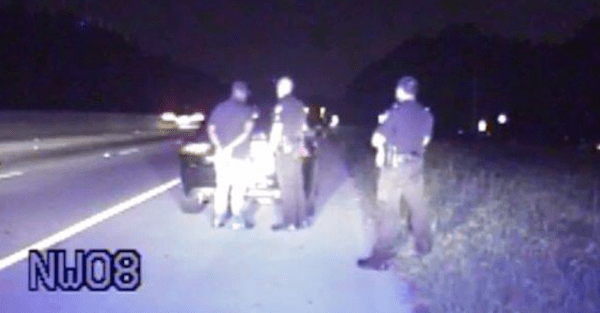 After you get pulled over for speeding and hand over your license, registration and insurance, the police officer almost always asks why you were speeding. It’s normally best to just go the route of apologizing and conveying your regret for breaking the law. All that flies out the window when you double the speed limit so you might as well pull a Jim Carey from the movie “Liar Liar” and just tell the truth, chances are you’re going to spend some time in the slammer anyway.

That’s exactly what the driver of a 2015 Charger did in Georgia earlier this week according to The Drive. He was pulled over after being clocked at 112mph. When asked if he knew how fast he was traveling he responded yes, and told the officer he was speeding for “Snapchat.”

Snapchat is a photo and video sharing app that allows you to apply different filters to the media you share. One of the most controversial is a filter that overlays the speed you’re traveling by using the phones GPS.

Basically this guy was going 112mph to show off to his friends on social media by using Snapchat’s mph filter. Not sure if it was worth it, because this 24 year old was charged with reckless driving and had his car impounded. Even then he’s pretty lucky. There have been some insane cases of this app filter being linked to fatalities.

Last year, a mother and her two kids were among 5 dead in a horrible crash after a young man decided to post up his 115 mph trophy on the Snapchat app. Snapchat has been sued over this when a young girl with a pregnant passenger tired to hit 100 mph on the filter for kicks. She hit 113 mph before hitting a man in a Mitsubishi who just started his shift as an Uber driver. He suffered permanent brain damage and sued Snapchat stating they are equally responsible for not deleting the filter after many complaints had been filed with similar circumstances. The young girl even snapped a picture of herself in a stretcher with blood on her head saying, she was “lucky to be alive.” Nothing has come out of the law suit as of yet.