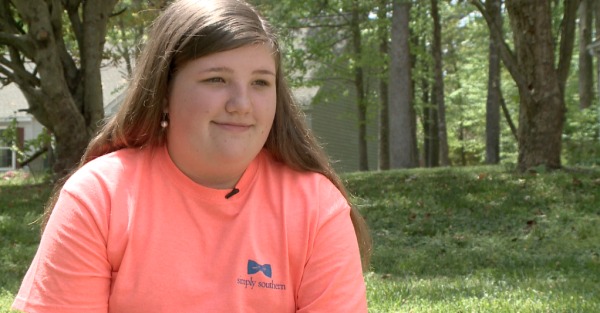 All she wanted to do was ride some roller coasters at Busch Gardens, but instead had to thwart a carjacking to save her seven year old sister. 12 year old Maddie Weiler was riding in the car with her mom and sister when they stopped to help the victims of a car crash.

According to local news station WTKR, While their mother was calling 911 to report the accident, one of the people in the accident, Paul Salsman, approached the van with the two sisters still inside. He reached in and opened the van and got in, claiming he had somewhere to be.

And that is when he met Maddie. She walks us through her thought process:

?I just went for it, nothing passed my mind except, ?He is a psycho and he needs to get out of the car?.?

She immediately started screaming for help while punching the man. So far so good, but this wasn’t the only strategy employed by the preteen genius.

Maddie somehow knew that she had a way to keep him from driving off with her and her sister that was as clever as it was effective: She grabbed the shifter and put the car into drive. In the midst of a stranger trying to steal her mom’s car, and delivering a beating to said stranger, Maddie knew that automatic cars have a lockout feature that prevents the car from being started in gear.

Her heroics gave her sister enough time to escape and kept the man from making a getaway. When the police arrived, Salsman had to be tased three times before being taken into custody.

Maddie fractured a growth plate in her wrist but otherwise, everyone was unharmed. She grew up in a family of police and firefighters and has taken their lessons to heart, passing on advice for anyone else in similar situation: