This is peak Russia in a sidecar 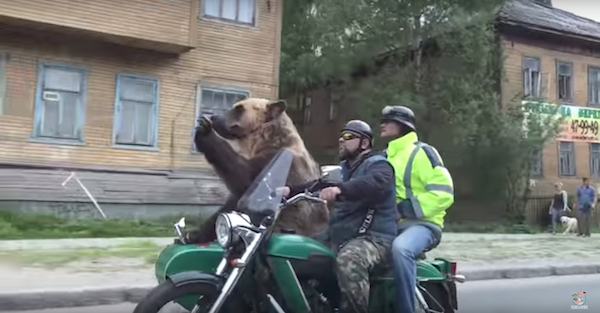 Imagine driving down the road and spotting a bear. That’s a terrifying image, right?

Now imagine driving down the road and seeing a bear… riding in a motorcycle’s sidecar and waving at you. That’s not necessarily a scary image, but it would certainly be jarring.

Drivers in Arkhangelsk, Russia saw two bikers with a bear, and the bear—named Tim, apparently—sat calmly in the sidecar and waved at cars passing by.

Related: A brand new dashcam captures a crazy collision on its first day

Tim and his two biker friends are a part of a traveling circus, which is run by the local Polar Wolves bike club, and it’s not the first time they’ve made an appearance in town.

The bear behaved very well while riding down the road, and one of the bikers can be seen giving the bear a treat in the video.

The bear seems very nice and friendly, but we’d still probably be a little freaked out if we saw a large bear while driving down the road. Even if he did wave.