Tank collector turns in a find worth millions 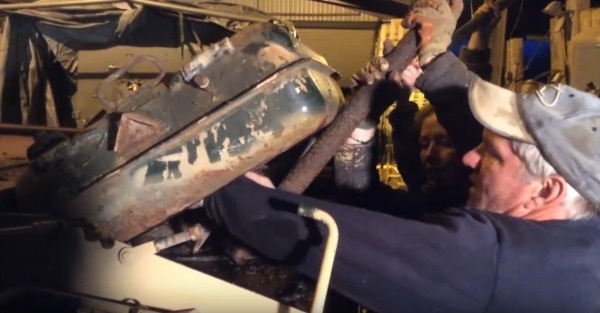 Do you consider yourself to be an honest person?  Even so, there’s a good chance you aren’t as honest as Nick Mead.  Nick runs Tanks-A-Lot in the UK, a company that buys old decommissioned military tanks and rents them out for the movies, private events and even driving lessons.

He scored a sweet Chinese copy of the Russian T-54 tank on eBay for £30,000.  Likely used in Kuwait during the invasion of 1990, this unit looks to have been built in the early 80’s. While working on the tank, he found rounds of ammunition and guns hidden in the fuel tanks.  This led to further investigation and ultimately £2million worth of gold bars.  Being the honest fellow Nick is, he had his mechanic Todd Chamberlain film the entire thing.

In the video you see them immediately calling the police after weighing all the gold and looking up what its worth.  Todd the mechanic reported to The Sun:

“We didn?t know what to do. You can?t exactly take five gold bullion bars down to Cash Converters without questions being asked, so we called the police.?

Makes sense to me, but how did they do this all so calmly?  I’d have been up for days at least thinking about my next move. They admit that though the police gave them a receipt and will be investigating where the gold came from, they will likely not see any money from this.

If this wasn’t crazy enough, let’s talk about the guy Nick bought the tank from. This was not just at an auction after being abandoned for years in some field. This tank was semi-restored by a 23 year old man named Joe Hewes.  Joe rebuilt the engine and still somehow did not discover the gold that was hidden in the fuel tanks.

I do hope that Nick sees some sort of finders fee for this. I trust that if he does he will share it with Joe.  Mister Mead mentions that if he were able to keep the money he’d buy a Rolls Royce Phantom, chop the back off and make a pickup truck.  Seems pretty reasonable to me.

Some interesting facts came up during the research for this story. Specifically that gold melts at 1948?F and a twenty dollar map gas torch from Home Depot burns at 3670?F.  So, you know…

Related: Crush Cars With Tanks And More At The New Military Theme Park