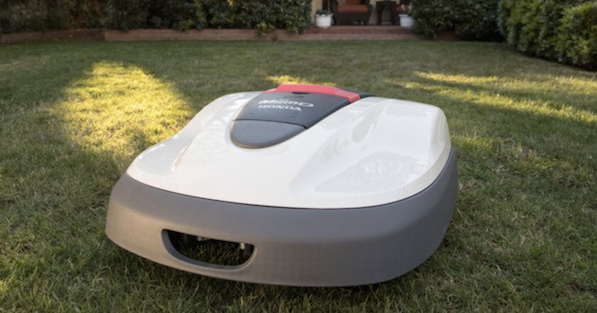 If this isn’t an early sign of Skynet taking over (Ask your parents about The Terminator, kids) I don’t know what is.  You can now have a robot cut your lawn.

Honda is most noted for making quality long lasting cars.  What some don’t know is they have been into robotics since the 1980’s.  After working on a human like android for many years, ASIMO was released in the year 2000.

Although ASIMO is not for sale and is used primarily for encouraging kids to get into science, Honda has thought of a way to puts its research to use today.  And that comes in the form of a Robot that can handle one of the most common household chores, cutting the lawn.

Miimo is the Bot’s name and its has only been available in the UK until now.  The Honda Power Equipment division will be offering two version of the Miimo in the states this June reported by The Drive.  The HRE 310 which will cost $2499 and run for thirty minutes and the HRE 520 that goes for $2799 and will last for one full hour of cutting your lawn.  They both run on lithium-ion batteries and I can tell you that if I spent that much on a lawn mower you better believe I’m getting the HRE520.  Either way, both units will self dock and charge when running low on power.

My initial thoughts once I got over the price tag was theft.  I live in a decent area, but I still wouldn’t trust a near $3,000 dollar piece of equipment out on my parkway by itself.  It’s not exactly hard to just pick this thing up and run. Honda thought of this and the Robot requires a PIN number to be activated once its picked up.  I hope it yells for help too.

The little Honda also comes with a wire that gets installed above or underground to mark out the area needing a trim.  This also keeps it away from things like ponds, the street or your prize Rose bush.

My only experience with anything like this is the Roomba. A robotic vacuum cleaner that looks very similar.  It leaves a lot to be desired as I feel I’m always involved in its job moving things and cleaning it. Naturally, I’m little hesitant on the Miimo, but after all, it’s a Honda.  If it’s anything like their cars it will just straight work.

I often wonder what’s next in the world of personal use Robotics. I dream of the day a robot is folding my laundry and doing the dishes. Hopefully they don’t gain consciousness, attack me and try and take over the world.  Ok, enough Terminator references for one story.