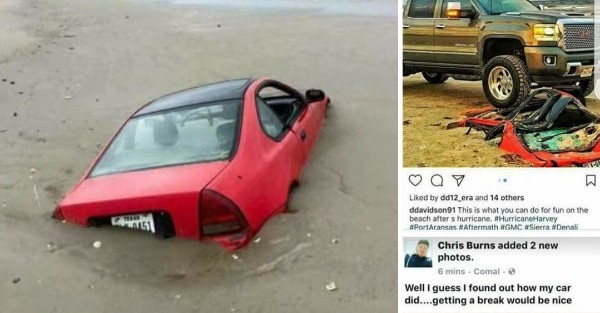 This year’s hurricane season has already been devastating. So far we’ve experienced the trauma from two major storms, Harvey and Irma. It’s unclear if more could be around the corner, but even if these are the last catastrophes to hit the coast of U.S., 2017 will still be remembered for the destruction it contained.

Texas is known for drivers with massive trucks, and a lot of those drivers came to help their fellow Texans when Hurricane Harvey devastated the state. However, at least one driver was a massive ass and decided to destroy more property, adding to the suffering of Texans.

Chris Burns lost his Honda Prelude to the storm when it was buried in the beach. Burns had been forced to abandon the car in Port Aransas after the transmission broke. The storm hit before he could have the car towed back.

Burns wasn’t sure about the condition of his car until a friend tagged him in a post that showed his car completely crushed in the sand. He initially assumed it was the storm that destroyed the car, until he saw a post by Instagram user @ddavidson91, showing a lifted GMC truck in front of his crushed car. The caption, “This is what you can do for fun on the beach after a hurricane,” making it appear as though the truck ran over the car and that the owner of the account was involved.

Since then, the account owner has denied being involved in any way, but he’s still not off the hook. A friend of Burns, who technically owned the car, is seeking legal help regarding the incident. However, in the meantime, Burns is left without a car.