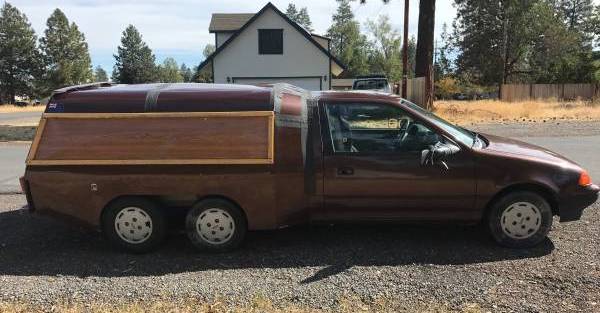 Are you living in Portland, Oregon, and want the world’s most hipster car? It’s so anti-establishment that the only way it was brought into this world was through the sheer will of an eccentric Seattle Boeing employee. It’s a Geo Metro, and all the lack of power that comes with it, plus a camper frame welded to the back. It’s “unique.” If this car were a human, it’d have a participation trophy from that one season of soccer it played when it was eight.

Rick Kretschmer, vagrant from New York, stumbled across the monstrosity when he decided that the Honda Fit he was living in at the time was way too luxurious. The car brought Kretschmer to almost every corner of the Western United States. Unfortunately, it wasn’t able to satisfy all of his needs.

You see his problem, don’t you? The only thing separating the Geo from a mansion is a kitchen, which is why Kretschmer is buying a new house.

Anyway, you can buy this amazing work of art here.