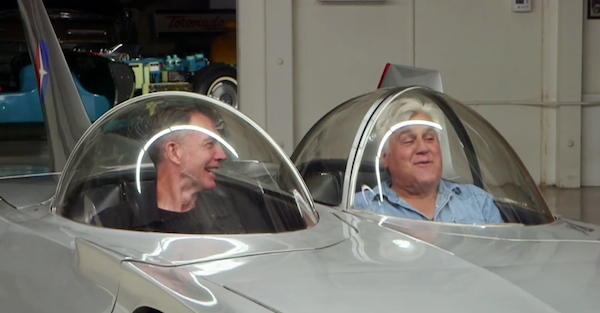 Jay Leno is still living the dream, driving some of the world’s most incredible cars, and in another installment of “Jay Leno’s Garage” GM’s VP of Global Design, Michael Simcoe, stopped by with two very special automobiles — a 1953 Firebird I and a 1958 Firebird III.

While the 1956 Firebird II was absent, Leno’s excitement was unfettered. He told Simcoe that the futuristic Firebird III has been his dream car since he was 8-years-old. It only took 59 years, but Leno was finally able to drive it.

The Firebirds are unique, bearing a stark resemblance to aircraft, which is far from coincidence. The cars were designed to inspire people with images of the future, and they still do, even into the next century.

One of the most unique features of the turbine-powered Firebird III is its center-mounted control stick. Taking its aerospace inspiration even further, the Firebird III uses a joystick to control its direction and speed. It understandably took some getting used to, but Jay had it under control in no time.