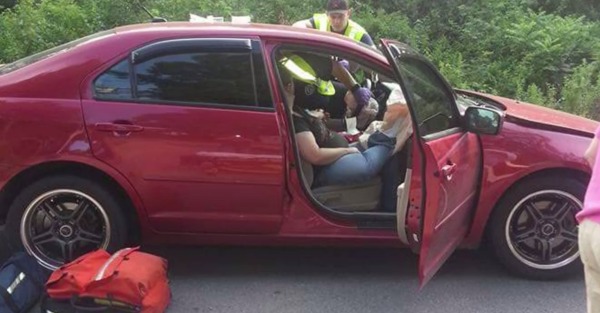 Passengers can do a number of things that aren’t safe while riding in the car, and one of the most dangerous things is putting their feet on the dashboard.

Audra Tatum, a mother of three from Georgia, always had a habit of putting her feet on the dashboard despite her husband’s objections, and she said she could put her feet down in time if they were in an accident.

Well, Tatum’s husband’s car was T-boned on the way to visit her parents two years ago, and Tatum had her feet on the dashboard. Everyone else in the car only suffered minor injuries, but Tatum told CBS News that her foot hit her nose and broke it, and she also broke her ankle, femur and arm upon impact.

Related: Idiot Miata driver nearly causes a wreck while passing someone on a blind turn

“Basically my whole right side was broken, and it’s simply because of my ignorance,” Tatum said. “I’m not Superman. I couldn’t put my foot down in time.”

Tatum had to go through numerous surgeries and weeks worth of physical therapy, and she is still struggling to do her job as an EMT. She said she can’t lift patients anymore and can’t stand for more than four hours.

Tatum said the airbags prevented her injuries from being even worse. As she recovers, she said she plans to tell more people about the dangers of putting feet on the dashboard.

“If I can save one person from doing this and they’re not going through it, that would be wonderful,” Tatum said.

Next time you catch yourself putting your feet on the dashboard, just remember how dangerous it can be.