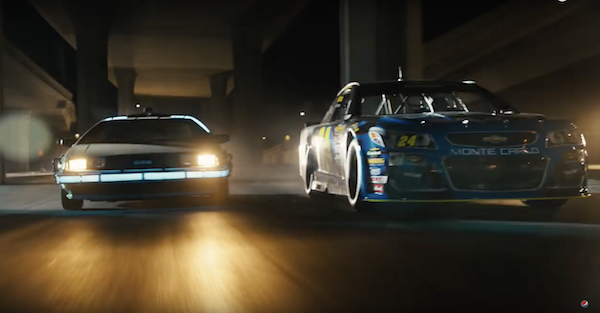 Most watching this years Superbowl won’t think anything of Pepsi’s latest commercial featuring Jeff Gordon, Cindy Crawford, and Kyrie Irving. Car enthusiasts and specifically NASCAR fans, on the other hand, are going to notice a pretty major error in what Jeff Gordon is driving.

So, did you catch it? Crazy right? The Monte Carlo hasn’t been used in NASCAR since 2008, and for some reason, its name plate shows up on the Cup Series Car Chevy used from 2013-2017 branded the “SS.”

How do major companies mess this sort of thing up? Was there no one in the entire production of the commercial that knew the Monte Carlo, in general, hasn’t been around for a very long time?

The world will heal from this major screw up, but come on Pepsi!! This year Chevy will be introducing the Camaro into the Cup Series, let’s just hope someone in marketing doesn’t order up a Mustang decal for it.