Driving a tank around suburban Nashville is totally normal 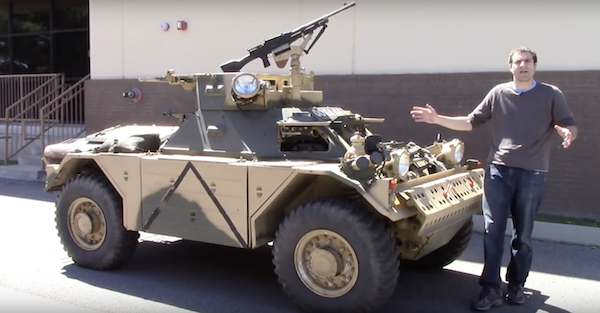 Even for a guy who drove an original Hummer around town like it was a Honda Civic, this is crazy. In this video we see Doug Demuro taking a leisurely cruise in one of the craziest retired military vehicles you can legally drive on a modern road.

Doug somehow found a Ferret, an old British tank-looking thing that’s technically an armored car due to its lack of tank threads. It has no doors and you enter the Ferret through the roof. This wouldn’t be a Doug video if he didn’t go for a ride, so he did just that. Naturally when driving a tank, you expend a lot of energy which requires you to nourish yourself. Doug drives the tank (with a gun and grenade launchers still on it) to the local drive through for some chicken nuggets and other health foods. Needless to say, this thing gets a ton of attention.
He later explains that the Ferret can squeeze four people in it, has a steering wheel facing down and for some weird reason has turn signals. You know, for proper battlefield etiquette.
If you’re the type of person who owns a Ferret, the thought of zombies taking over excites you a little too much. Too bad the gun and grenade launchers are fake on this one.
Related: Tank collector turns in a find worth millions