Watch a Jeep emerge from its sandy tomb after 40 years 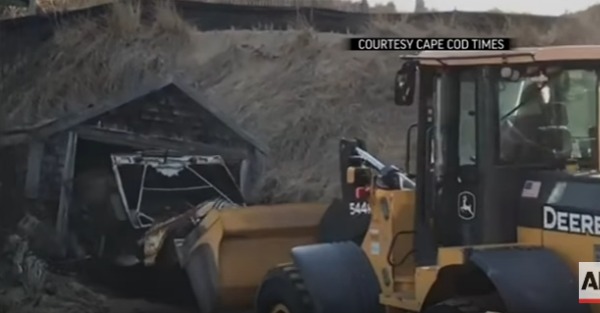 After being entombed for 40 years,  a white Jeep Wagoneer, a so-called “beach buggy” that once hauled a family up and Ballston Beach in Truro, near Cape Cod, was finally pulled free.

As you  might image, it was a rusted, falling apart mess.

A John Deere tractor pulled the Jeep’s nearly flattened body from the crushed old garage, thus ending a 40-year-old tale that frustrated a family and, lately, captivated a community.

The Cape Code Times noted that the family wanted to remove the Jeep decades ago, but the town refused because it was worried moving the Jeep would harm the dunes. Now, years later, the town changed its mind, and the family was free to move the rusted hulk.

“It’s probably going to fall apart like something out of Indiana Jones,” Basil Musnuff, whose mother owns the Jeep, told the Times before the removal. “I’m not even sure it’s a Jeep.”