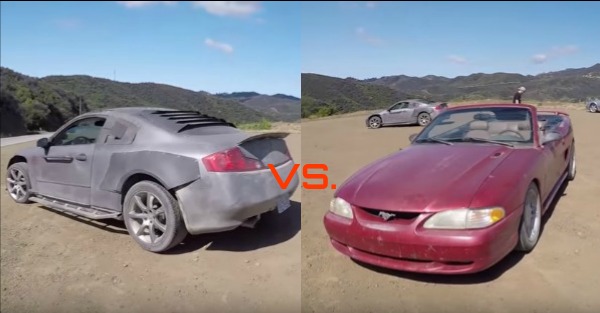 It’s the battle of the “shitboxes!” Those are not my words so direct any complaints to Matt Farah.

Freddy “Tavarish” Hernandez  and B is for Build’s Chris decided to try to take two cheap, cruddy looking cars and turn them into fast, decent rides. Hernandez took a ’96 Mustang GT Convertible and created something that was actually really fun to drive. Farah is so happy with the end product on this. The radio even works!

Next up is Chris’s rebuilt Infiniti G35 Coupe. That’s right, this one is rebuilt, as in it was totaled previously to Chris’s purchase. There are some minor differences between Hernandez’s car and this one. The Mustang is in good shape, with almost no rust and some minor paint issues. Chris’s car on the other hand looks like Tina Turner reprised her Mad Maxx role, while armed with nothing but a backroad Alabama auto yard. Can Chris get a thumbs up for bolting 50 lbs of scrap metal to his car?

The biggest difference here? The G35 is FAST.

So which one wins? Does outright speed cover for the G35’s purposely awful image, or does the Mustang’s surprisingly good shape make up for being a bit slower on a track?