What’s the Future for Hydrogen-Powered Vehicles? 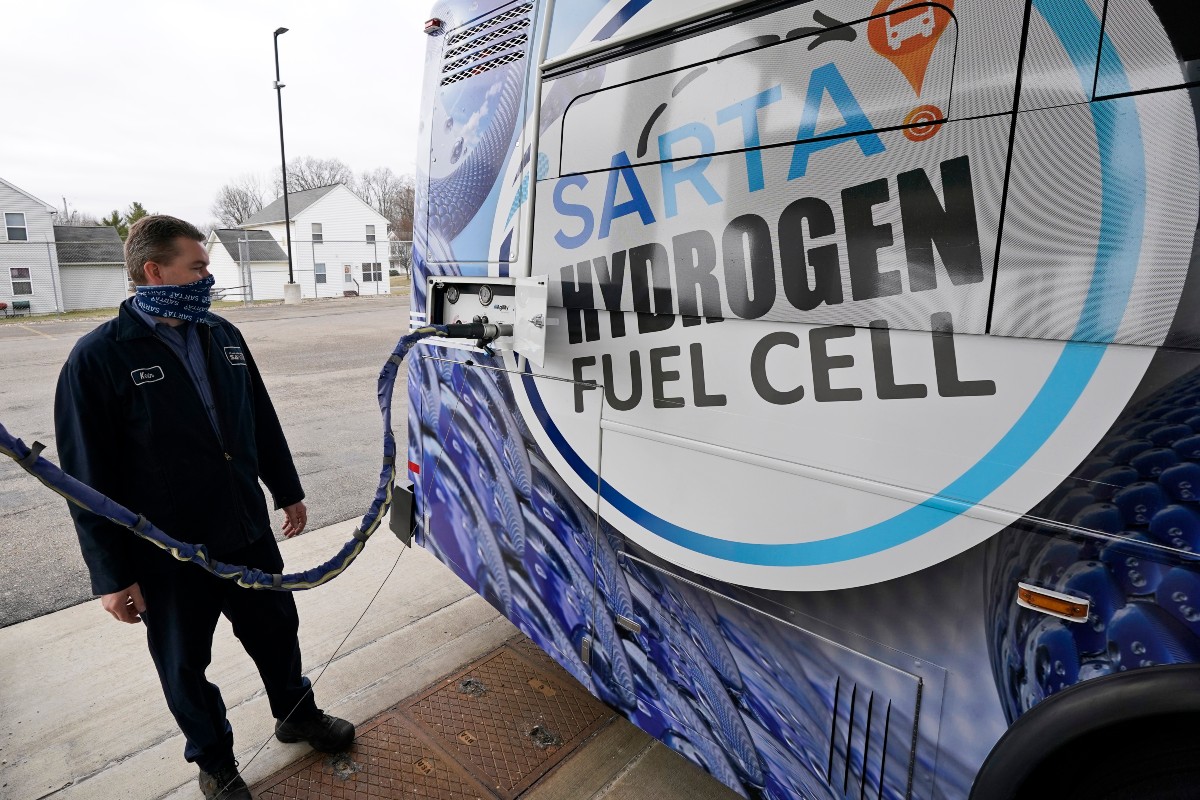 CANTON, Ohio (AP) ? Each morning at a transit facility in Canton, Ohio, more than a dozen buses pull up to a fueling station before fanning out to their routes in this city south of Cleveland.

The buses ? made by El Dorado National and owned by the Stark Area Regional Transit Authority ? look like any others. Yet collectively, they reflect the cutting edge of a technology that could play a key role in producing cleaner inter-city transportation. In place of pollution-belching diesel fuel, one-fourth of the agency?s buses run on hydrogen. They emit nothing but harmless water vapor.

Hydrogen, the most abundant element in the universe, is increasingly viewed, along with electric vehicles, as one way to slow the environmentally destructive impact of the planet?s 1.2 billion vehicles, most of which burn gasoline and diesel fuel. Manufacturers of large trucks and commercial vehicles are beginning to embrace hydrogen fuel cell technologies as a way forward. So are makers of planes, trains and passenger vehicles.

Transportation is the single biggest U.S. contributor to climate change, which is why hydrogen power, in the long run, is seen as a potentially important way to help reduce carbon emissions.

To be sure, hydrogen remains far from a magic solution. For now, the hydrogen that is produced globally each year, mainly for refineries and fertilizer manufacturing, is made using natural gas or coal. That process pollutes the air, warming the planet rather than saving it. Indeed, a new study by researchers from Cornell and Stanford universities found that most hydrogen production emits carbon dioxide, which means that hydrogen-fueled transportation cannot yet be considered clean energy.

Yet proponents of hydrogen-powered transportation say that in the long run, hydrogen production is destined to become more environmentally safe. They envision a growing use of electricity from wind and solar energy, which can separate hydrogen and oxygen in water. As such renewable forms of energy gain broader use, hydrogen production should become a cleaner and less expensive process.

Volvo Trucks, Daimler Trucks AG and other manufacturers have announced partnerships, too. The companies hope to commercialize their research, offering zero-emissions trucks that save money and meet stricter pollution regulations.

In Germany, a hydrogen-powered train began operating in 2018, and more are coming. French-based Airbus, the world?s largest manufacturer of airliners, is considering hydrogen as well.

?This is about the closest I?ve seen us get so far to that real turning point,? said Shawn Litster, a professor of mechanical engineering at Carnegie Mellon University who has studied hydrogen fuel cells for nearly two decades.

Hydrogen has long been a feedstock for the production of fertilizer, steel, petroleum, concrete and chemicals. It?s also been running vehicles for years: Around 35,000 forklifts in the United States, about 4% of the nation?s total, are powered by hydrogen. Its eventual use on roadways, to haul heavy loads of cargo, could begin to replace diesel-burning polluters.

No one knows when, or even whether, hydrogen will be adopted for widespread use. Craig Scott, Toyota?s head of advanced technology in North America, says the company is perhaps two years from having a hydrogen truck ready for sale. Building more fueling stations will be crucial to widespread adoption.

Kirt Conrad, CEO of Canton?s transit authority since 2009, says other transit systems have shown so much interest in the technology that SARTA takes its buses around the country for demonstrations. Canton?s system, which bought its first three hydrogen buses in 2016, has since added 11. It?s also built a fueling station. Two California transit systems, in Oakland and Riverside County, have hydrogen buses in their fleets.

?We?ve demonstrated that our buses are reliable and cost-efficient, and as a result, we?re breaking down barriers that have slowed wider adoption of the technology,? Conrad said.

Read More: Will Electric Flying Race Cars Be a Reality This Year?

The test at the Port of Los Angeles started in April, when the first of five semis with Toyota hydrogen powertrains began hauling freight to warehouses in Ontario, California, about 60 miles away. The $82.5 million public-private project eventually will have 10 semis.

Hydrogen fuel is included in President Joe Biden?s plans to cut emissions in half by 2030. The infrastructure bill the Senate approved passed this week includes $9 billion for research to reduce the cost of making clean hydrogen, and for regional hydrogen manufacturing hubs.

The long-haul trucking industry appears to be the best bet for early adoption of hydrogen. Fuel cells, which convert hydrogen gas into electricity, provide a longer range than battery-electric trucks, fare better in cold weather and can be refueled much faster than electric batteries can be recharged. Proponents say the short refueling time for hydrogen vehicles gives them an edge over electric vehicles for use in taxis or delivery trucks, which are in constant use.

That advantage was important for London-based Green Tomato Cars, which uses 60 hydrogen fuel cell-powered Toyota Mirai cars in its 500-car zero emission fleet to transport corporate customers. Co-founder Jonny Goldstone said his drivers can travel over 300 miles (500 kilometers) on a tank and refuel in three minutes.

Because drivers? earnings depend on fares, Goldstone said, ?if they have to spend 40, 50 minutes, an hour, two hours plugging a car in in in the middle of the working day, that for them is just not acceptable.?

For now, Green Tomato is among the largest operators of hydrogen vehicles in what is still a tiny market in Europe, with about 2,000 fuel cell cars, garbage trucks and delivery vans on the roads.

About 7,500 hydrogen fuel cell cars are on the road in the U.S., mostly in California. Toyota, Honda and Hyundai produce the cars, which are priced thousands more than gasoline-powered vehicles. California has 45 public fueling stations, with more planned or under construction.

Unlike with buses and heavy trucks, experts say the future of passenger vehicles in the U.S. lies mainly with electric battery power, not hydrogen. Fully electric vehicles can travel farther than most people need to go on a relatively small battery.

And for now, hydrogen production is adding to rather than reducing pollution. The world produces about 75 million tons a year, most of it in a carbon emission-creating processes involving steam reformation of natural gas. China uses higher-polluting coal.

So-called ?blue? hydrogen, made from natural gas, requires an additional step. Carbon dioxide emitted in the process is sent below the earth?s surface for storage. The Cornell and Stanford study found that manufacturing blue hydrogen emitted 20% more carbon than burning natural gas or coal for heat.

That?s why industry researchers are focused on electrolysis, which uses electricity to separate hydrogen and oxygen in water. Hydrogen mixes with oxygen in a vehicle?s fuel cell to produce power. The amount of electricity generated by wind and solar is growing worldwide, making electrolysis cleaner and cheaper, said Joe Cargnelli, director of hydrogen technologies for Cummins, which makes electrolyzers and fuel cell power systems.

Currently, it costs more to make a hydrogen truck and produce the fuel than to put a diesel-powered truck on the road. Hydrogen costs about $13 per kilogram in California, and 1 kilogram can deliver slightly more energy than a gallon of diesel fuel. By contrast, diesel fuel is only about $3.25 per gallon in the U.S.

But experts say that disparity will narrow.

?As they scale up the technology for production, the hydrogen should come down,? said Carnegie Mellon?s Litster.

While a diesel semi can cost around $150,000 depending on how it?s equipped, it?s unclear how much fuel cell trucks would cost. Nikola, a startup electric and hydrogen fuel cell truck maker, estimated last year that it would receive about $235,000 for each hydrogen semi it sells.

Clean electricity might eventually be used to make and store hydrogen at a rail yard, where it could refuel locomotives and semis, all with zero emissions.

Cummins foresees the widespread use of hydrogen in the U.S. by 2030, sped by stricter diesel emissions regulations and government zero-emissions vehicle requirements. Already, Europe has set ambitious green hydrogen targets designed to accelerate its use.

?That?s just going to blow the market open and kind of drive it,? Cargnelli said. ?Then you?ll see other places like North America kind of follow suit.?