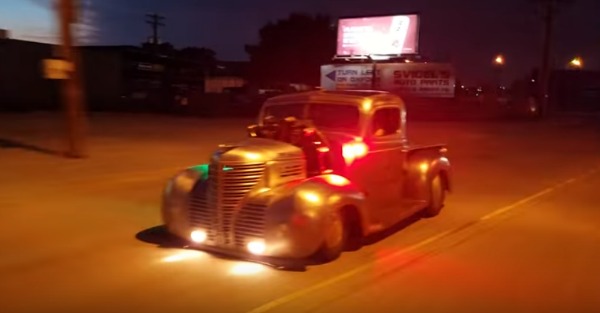 If you’ve ever wondered what an airplane engine would look like in a pickup then look no further.  The Corn family of Englewood Colorado decided a tradition engine swap in their 1939 Plymouth pickup was not happening.  You see, the Corns own a salvage yard and crazy wacky projects are what they do.  They even have a  “wrench-0-rama” at their house every Wednesday where family and friends have a few cold ones and build cool cars.

The youngest Corn, Adam, reported to Motortrend that his dad Gary decided one day that they needed another project.  He went over to a local airplane junk yard and picked up a 757 ci Jacobs R-755- A2 radial aircraft engine.  This was from the 1950s and they weren’t sure if it would even run.  After bringing it home and putting it on a special stand, it surprisingly fired up.  A carb swap later and it was ready to go.  Of course, the old pickup truck was in for a lot of blood, sweat, tears and welding before its custom tube chassis was strong enough to support the seven cylinder monster of an engine.

After fitting the engine in the Plymouth pickup, a way to send its spinning prop power to a normal car transmission was needed. Naturally, a trusty Turbo 400 transmission was utilized.  Various junk yard parts were put to good use to accomplish the task.  The propeller shaft is connected via a custom cogged pulley with a kevlar blower belt to run a boats V-drive.  A custom driveshaft connects the V-drive to the front of the transmission where it’s able to spin the torque converter.

The airplane theme of this truck doesn’t end with its engine.  The truck is littered with aircraft lighting, gauges and seats and even has dual steering wheels to mimic a cockpit.

As you see in the video, the truck runs and drives.  The sound this thing makes is familiar to anyone who has been around planes bit completely changes when seen in this context.  The Corn family took it to run on the Bonneville salt flats to prove that this plane truck is not just for show.

Motortrend also reported that the Corn family has heard offers for their own reality TV show.  If they do get a show, they have set the bar pretty high for engine swaps. Anything other than a P-51 Mustang fighter plane engine in a Ford Mustang would be anticlimactic.

Related: Custom VW Bug with a Radial Engine is Insane!