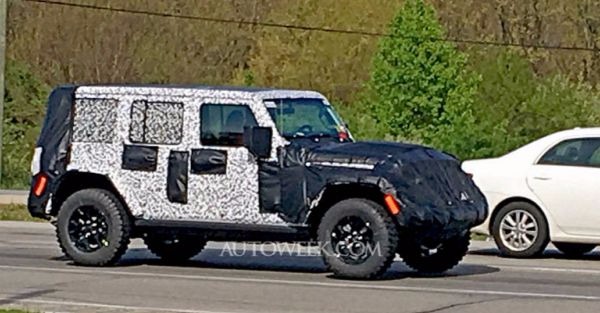 Despite FCA’s recent financial troubles, the iconic Jeep Wrangler has continued on as a big seller for the company, but according to a new report from Automotive News, the 2018 Wrangler will be offered with a substantial upgrade.

First reported by thetruthaboutcars.com, it appears that Fiat Chrysler provided the National Highway Traffic Safety Administration with certain documents containing information about the next-gen Wrangler, which were then posted to the Wrangler-enthusiast site jlwranglerforums.com.

The most notable aspect regarding the new Wranger–revealed in these leaked documents–was that it will be offered with a new 2.0-liter turbocharged four-cylinder engine good for 368 horsepower. However, as quickly as this information came out, other publications–such as Road and Track–reported these engine specs to be false, citing unnamed sources.

Fiat Chrysler has also declined to provide any comment on the matter, according to a report by Motor Trend.

So, this could mean the 368-horsepower figure from the leaked documents was a mere typo or the new Wrangler might actually come with a very potent turbo motor if the report turns out to be true.

The same documents that sparked the rumor about the horsepower rating also revealed the 2018 Wrangler will be offered only in the four-door body style to begin its life cycle. There were also three trim levels listed for the next-gen Wrangler, which are Sport Unlimited, Sahara Unlimited, and Rubicon Unlimited.

This doesn’t mean the two-door version won’t eventually be offered, but it seems like the priority is to begin production of the four-door Wrangler to start things off.

The 2018 Jeep Wrangler is expected to officially be shown to the public later this year at the Los Angeles Auto Show, according to Auto Blog.

Perhaps then we’ll find out the official horsepower rating for the Jeep’s new turbo-four.