Watch 1,400 cars get recovered from a watery grave 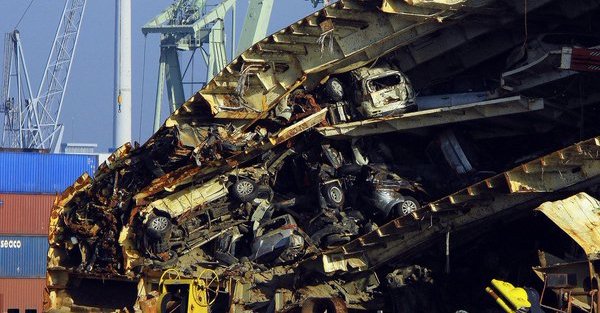 When have you ever known the Dutch to shy away from an engineering challenge?

In December, 2012, the cargo ship Baltic Ace sank to the bottom of the sea after it collided with another container ship, the Corvus J. In just 15 minutes, the Baltic Ace was resting on the bottom of the North Sea, along with around 1,400 Mitsubishis and 140,000 gallons of oil. On a more morbid note, there may have also been six crew members trapped in the wreckage.

With the vast amount of harmful chemicals and metals now sitting at the bottom of the sea (140,000 gallons of oil isn’t great for the environment) and the ship positioned as a dangerous maritime hazard to other ships passing through the trade route, Rijkswaterstaat, a part of the Dutch Ministry of Infrastructure and the Environment, commissioned Royal Boskalis Westminster and Mammoet with the task of bringing the sunken cargo ship to the surface in March, 2014.

Using two barges with a cable strung between them to create a giant cheese cutter of doom, Royal Boskalis Westminster and Mammoet sliced the doomed ship into eight pieces before lifting the whole mess to the surface. To top it all off, they recycled most of the wreckage.

Related: Cruise Passenger Films His Own Ship Destroying a Marina and All the Docked Ships as it Leaves Port