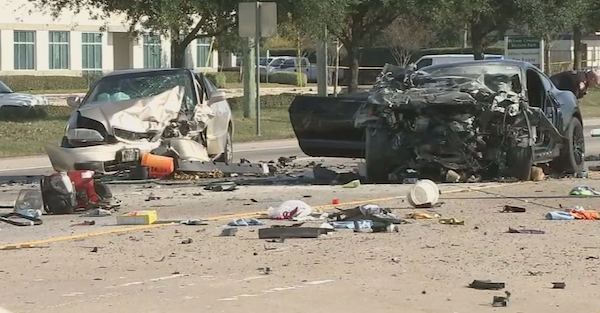 The crash killed two people and injured two more, according to ABC 13 in Houston.

Officials said the drivers of two mustangs were racing each other at high speeds on a six-lane highway in Houston in the middle of the day, when at some point, one of the mustang drivers t-boned an SUV and then hit an Acura. pic.twitter.com/CPP1MBDSSK

Related: Two men sue NASCAR and Daytona claiming they were hurt during a crash at the track

Sheriff Ed Gonzalez said the drivers in the two Mustangs were drag racing at speeds of over 90 mph on Sam Houston Tollway. He said one of the Mustang drivers, in his mid-40s, t-boned an SUV and then hit an Acura.

The other Mustang driver wasn’t injured, but he now faces the possibility of multiple charges.

It was a tragic accident, and our thoughts go out to the families of the drivers killed in the crash.