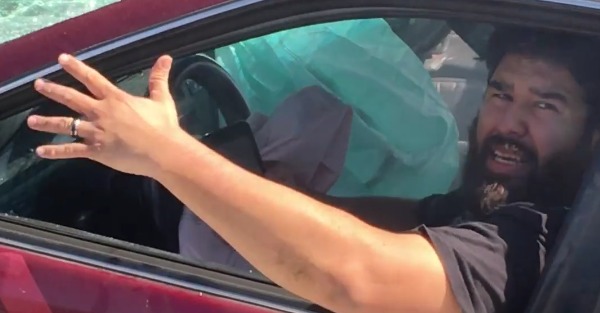 How does this happen?

A man identified as Brian Steimke on Facebook took this video of a car being dragged by a truck.

The Nissan Maxima was attached to a truck hauling 50,000 pounds of carrots, according to KCBS-TV in Los Angeles.

KCBS, quoting the California Highway Patrol, said the truck and the car collided as the truck, going 30 miles per hour, tried to move in to the left  lane as the car while trying to pass. While Siemke?s video said the car was dragged four miles, it was actually .7 of a mile, according to the highway patrol.

Other drivers honked to get the truck?s attention until one finally got in front of the truck to force it to stop. Steimke got out and said, ?Dude, the guy was underneath your truck.?

The truck driver?s response? ?I didn?t know it!?

Related: Driver must be blind, can’t see giant semi-trailer right next to him