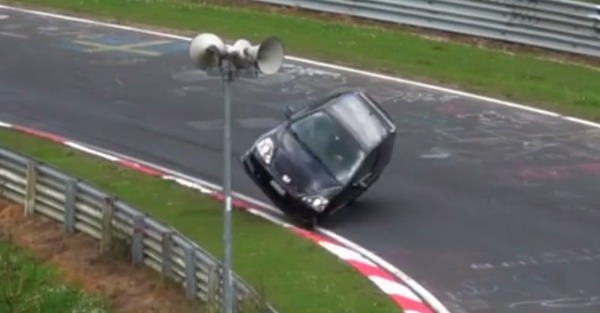 The EP3 Honda Civic was not a particularly well received car here in the US. It has been held up as a turning point when Honda began to lose its way. But Honda never really gave it a fair shot. In order to protect the Civic-based Acura RSX Type S’  status as the faster car, Americans did not get the Type-R variant of the Civic, having to settle for a watered down Si trim that was one transmission gear and 50 horses short of the top of the line RSX. Not to mention that strange dash-mounted shifter.

Until the recent news that the new Civic Type-R would come stateside for the first time ever, the only chance Americans got to see a true Type-R was ripping around in Japan or Europe. And this is exactly what they didn’t want to see.

This Type-R owner was blasting down the famed Nurburgring when he forgot a few things. Namely, that the Civic doesn’t weigh much and Nurburgring curbs can be brutal. Hot hatches have a tendency to lift a rear tire during hard cornering and it didn’t take much to send that light corner over the top.

The following flip and slide down the tarmac are hard enough to watch, but the recovery effort is just as painful. Seeing the lifeless husk dragged around until they could get it loaded onto the flatbed serves as a cold reminder that the track is called “The Green Hell” for a reason.

Related: The first Civic Type R to be sold in America is a departure from Hondas of old