Teslas are advanced but sometimes fail at the easy things 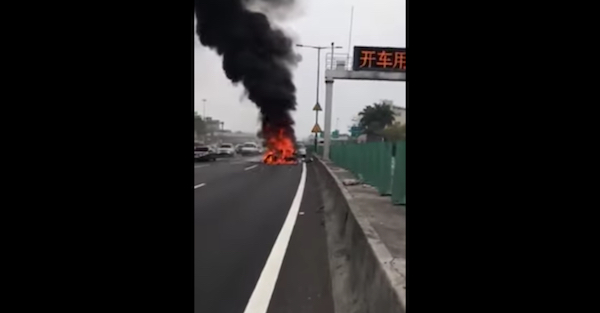 Tesla has been having a rough go of things lately. Autopilot sometimes runs cars into walls and a variety of other road-going and static objects across the country, allegedly of course, but now the falcon doors on the Model X might not work quite as well as they should, which is to say, at all.

According to a post on WeChat, Lee Tada and her boyfriend were being driven through China’s Guangzhou City by their driver when they crashed into a guardrail. Lee’s car spun around before being struck head on by another car. As if that wasn’t bad enough, the impact caused the car’s battery to explode.

The final part of this nightmarish scenario came into play when the doors on the car wouldn’t open. The Model X’s doors are electric, but, in an emergency, the doors can be manually opened with a hidden handle near the car’s speakers. Some people say this is a little too well hidden, especially in an emergency situation. Lee said she was in a state of shock after the accident and had to be pulled from the car.

Tesla’s defense was that all cars have the ability to catch on fire every now and then:

We are glad our customer and their passengers are safe. Working closely with authorities to facilitate their report, we have found that the debris field and damage observed indicate a very high speed collision, which can result in fire damage to any kind of vehicle, not just electric vehicles.

In fact, the other car in this incident (a gasoline-powered car) also caught on fire. Incidents of fires are far more likely to occur in traditional gasoline-powered vehicles than in electric vehicles.

So, yeah. Not really a firm commitment to making sure this doesn’t happen again. Could this story get any worse? It can. The driver, Lee said, was hospitalized after his airbag didn’t deploy.

Related: Tesla autopilots itself directly into a wall