McLaren Flies off Cliff, Driver Gets Rescued by Helicopter 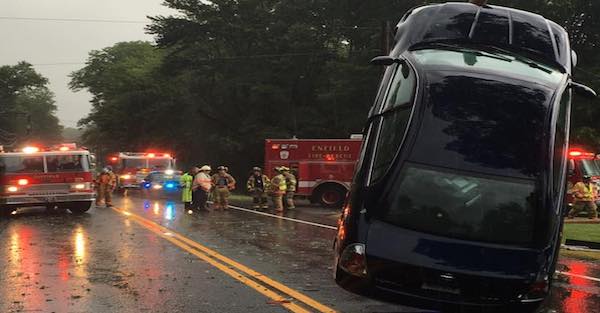 A mother and her two young children, ages 4 and 5 were involved in a bizarre accident Wednesday in which their car was strung up by a telephone pole line leaving them stranded inside the car.

Lisa Beaulieu told FOX61 that while driving she spotted debris falling off a tree which caused a telephone pole to break near the top.

“At that point, we were pretty much right underneath it. What we didn’t know at the time was that there was a wire still attached to it,” reported Beaulieu.

She continued on saying that the wire had attached itself to the underside of the car and lifted the front end off the ground. Looking at the pictures it seems that she likely drove forward with the wire attached and that put tension on the line that was still connected to the pole. Before breaking the line lifted the front end of her car up in the air leaving it resting on its rear bumper.

Mountain Road is closed between Ratley Road and the Stone St.'s intersection. Please seek an alternate route. Single car MVA, all occupants were safely extricated with the help of FD, PD, and Eversource.

The family was stranded in their Nissan sedan for 45 minutes before they were rescued by emergency crews who needed to first make sure the wire wasn’t live.

Beaulieu was so grateful for the workers who rescued her she said this to FOX61:

“The dispatcher was amazing, the firefighters, everybody that approached us and helped us out made my kids feel very safe. The EMS team that took us out of the scene were so, so good with my kids. They just made us feel so calm and safe, and so that made the situation better.”

The events leading up to this car looking like it just won a wheelie stand competition had to be just perfect. The chances of this happening again are slim but it sure does make for a great story this family can tell for years to come.