With Talladega coming up this weekend, here’s a look back at some of the wildest wrecks on the track 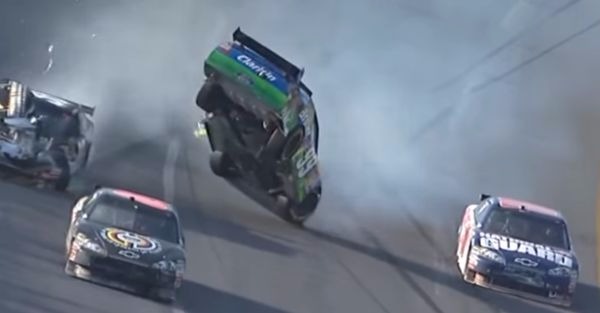 At 2.66 miles in length, Talladega is the longest oval track on the current NASCAR Cup Series schedule. It first opened its doors in 1969 as Alabama International Motor Speedway, but officially changed names in 1989 to Talladega Superspeedway, according to USA Today.

In Talladega’s 48-year history, the track has hosted some of NASCAR’s most exciting races as well as a handful of the sport’s most astonishing crashes. Below are five wild crashes that must be seen to believe.

If you ever wondered why NASCAR uses restrictor plates at Talladega and Daytona. The answer is because of Bobby Allison’s wild crash in the 1987 Winston 500. Allison’s stock car was traveling at 200 mph when his tire blew out, which caused his automobile to lose control and fly into the catchfence. NASCAR mandated that restrictor plates would be used during superspeedways races beginning in 1988.

Even though Rusty Wallace finished the 1993 Winston 500 in sixth place, he probably wasn’t satisfied with the top-10 finish. On the final lap, Wallace’s car made contact with Dale Earnhardt Sr.’s No. 3 Chevy, thus causing Wallace’s car to spin, fly into the air, and then roll over several times. Fortunately, Wallace escaped the crash with just a broken wrist, minor cuts, and a few bruises. The legacy of this crash was NASCAR’s decision to add roof flaps to the hood of its cars to help keep them grounded.

Many NASCAR fans today know Ricky Craven as ESPN’s NASCAR analyst, but he was also a successful driver during his time, having won races in each of NASCAR’s top-3 levels of racing. However, the 1996 Winston Select 500 probably isn’t one of his fondest memories, as that’s the race in which his car flew into the air before crashing back down onto the pavement. This mangled car is actually on display about a mile away from the track at the International Motorsports Hall of Fame in Talladega, according to NASCAR.com.

2) Matt Kenseth goes upside down during Geico 500 at Talladega

The biggest accomplishment of Matt Kenseth’s career was probably winning the NASCAR Cup Series title in 2003. On the flip side, his worst moment could have been the crash in the 2016 Geico 500 where his car went upside down after being pushed below the yellow line by Joey Logano. Kenseth was okay after this crash despite being 44 years old when it happened. Many drivers retire from the sport before reaching their mid-40s.

One of NASCAR’s scariest-looking crashes happened during the 2009 Aaron’s 499. When Carl Edwards tried to block Brad Keselowski’s Ford on the last lap, the two cars made contact, which caused the vehicle Edwards was driving to lose control, making Edwards’ car soar up the racetrack with all four wheel off the ground. The car eventually hit the fence before landing back on all four wheels. During the broadcast, NASCAR analyst Darrell Waltrip could be heard saying, “That looked like Bobby Allison did here in 1987.”