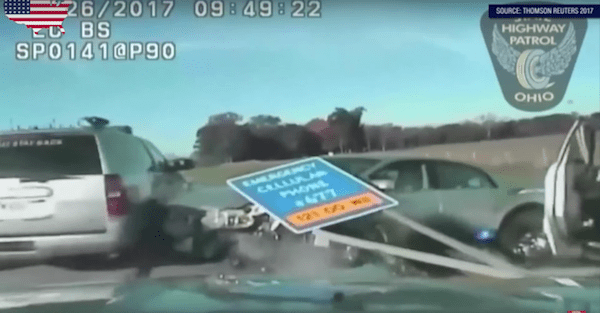 Most 10-year-old boys are rambunctious and can be difficult to handle. But one 10-year-old in Cleveland, Ohio went above and beyond as he stole his mom’s boyfriend’s car and took it on a joyride that led to a high speed chase.

The boy was apparently “bored” and got the keys to the car and went for a joyride at 8:30 a.m while he was waiting on his sister to take him to school. According to The Drive, the mother called 911, and police found the boy and motioned for him to pull over.

Instead, the boy hit the gas and was going about 100 mph in a chase that lasted about an hour. Police placed a spike strip on the highway, but the boy went onto the shoulder to avoid it. The police were able to keep him on the shoulder while a Ford Interceptor Utility was able to make contact with the car and stop it.

Police pulled the boy out of the car, and he was kicking and spitting at them. They didn’t pull out their weapons due to his age,

Here’s video from the end of the chase when police finally caught him.

Related: This meandering car chase was full of surprises right up to the end

That fact that he’s 10 and already knows how to drive that well is scary enough, and this wasn’t his first joyride in recent weeks. Hopefully the police can talk some sense into him.