“I was shaped like a U,” says this motorcyclist as police search for a hit and run suspect 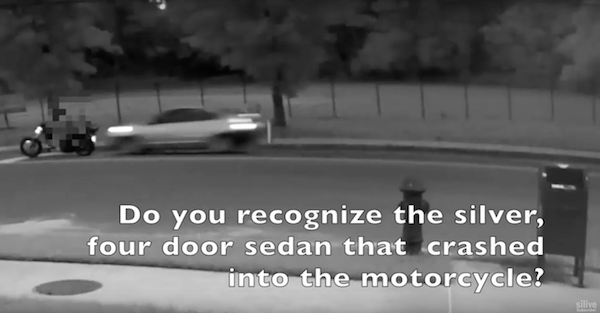 It takes a severely disturbed human being to leave the scene of an accident not knowing if you just killed someone.

“I wouldn’t even call them a person, that’s an animal,” said Frank Morse, 49, who was badly injured in a hit-and-run last weekend according to the report on Staten Island Real-Time News.

As you see in this video, Morse was just sitting at a red light when a silver sedan struck him from the rear at what looks to be at an absolute minimum 20 mph.

“I hit the ground hard and when I landed, I couldn’t straighten out my body,” he said. “I was shaped like a U.”

According to to silive.com, Morse suffered a shattered pelvis, torn ligaments and has a dislocated shoulder. He was in surgery for nine hours and his sister said he is facing a long rehabilitation, which may consist of learning to walk again.

“I’m in a lot of pain, today. I don’t have any aspirations about my recovery. I’m going to do my best to get back my life the way it was,” says a man who’s life, along with his body, is shattered.

Police have said the silver four-door would have severe damage to the hood and front driver side. The driver is believed to be a female in her 30s. If you live in or around Staten Island, N.Y. please be on the look out.

Related: Watch a biker chase down a hit and run driver