The Big One strikes at the end of the Daytona 500 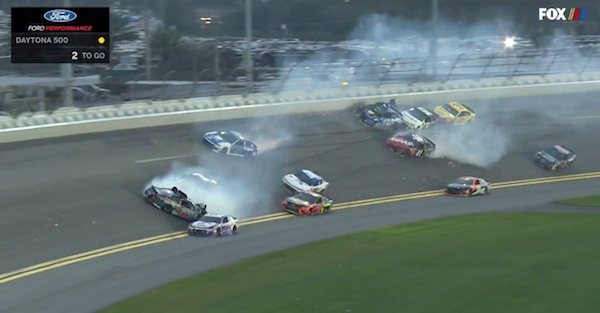 With only two laps remaining at the Daytona 500, Kurt Busch and Ryan Blaney were looking to make a move to pass leader Denny Hamlin.

The three had been jockeying for position for several laps, and all three had led late in the race. Hamlin blocked Busch from passing him, and that led to Busch spinning out off the bumper of Blaney.

Busch’s No. 41 car made contact with several cars and knocked them out of the race. Blaney, Brendan Gaughan and Martin Truex Jr. all suffered damage and had their chances of winning come to an end, and there were several more drivers involved.

The crash sent the race into overtime. Hamlin and Aric Almirola were in the lead on the restart, but a big portion of the drivers who had a chance of winning saw their hopes come to an end.