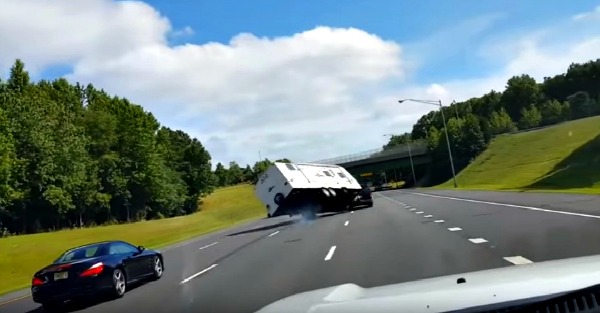 This is frightening as all get out.

A truck pulling a camper lost control on the Garden State Parkway on Monday. You can see the camper at first start to swerve gently, and then all hell broke loose. The truck and the camper veer across the highway, and the camper overturns.

Luckily, no other cars seem to have been hit, and no one was injured, according to the information provided by LiveLeak. Here’s the video description:

A driver caught the moment a camping trailer began swerving into traffic and flipped on the Garden State Parkway near Tinton Falls, New Jersey, on July 24.Nicholas Brinson noticedthe camper swerving as the SUV towing it started to lose control near southbound exit 100. The camper eventually flipped onto its side but the SUV stayed upright.

The trailer blocked several lanes and slowed traffic for almost an hour until road crews managed to turn the camper back to an upright position. No injuries were reported.

These sorts of crashes, unfortunately, happen from time to time, often caused by exceeding the recommended towing speed or improper weight distribution. There’s no word on whether that’s what caused this accident.