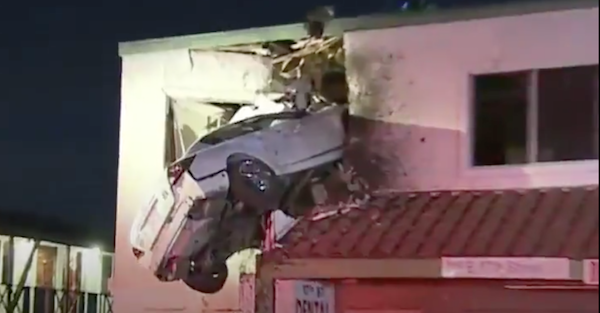 A driver in Santa Ana, California hit the road’s center divider, and his car flew into the second story of a building.

According to the Los Angeles Times, the driver admitted to using narcotics before getting behind the wheel and ultimately crashing into the dental offices.

A car crashed into the second story of a building in Santa Ana, California, this morning. Officials say the vehicle hit the road's center divider and went airborne.

Firefighters arrived at the scene and helped the occupants of the vehicle out while the car was still hanging from the building.

Two people needed to be rescued after this car crashed into the second story of a building in California pic.twitter.com/D7AnkXz6Wp

Luckily the occupants survived the crash, and while there was major damage to both the car and the building, the situation could have been much worse.