A crash on an Illinois highway required a bizarre cleanup 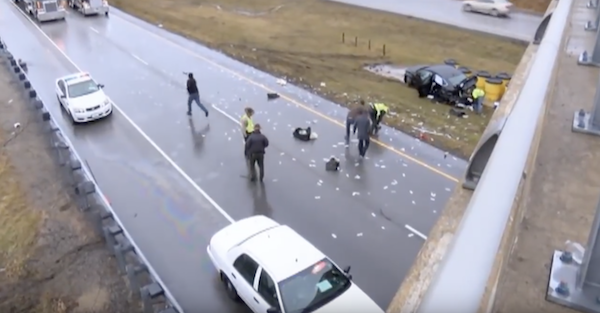 Illinois State Troopers were given the ultimate test of integrity when a courier vehicle carrying thousands of dollars in casino money crashed leaving cash all over the highway.

According to the Champaign News-Gazette, a courier for a company that owns video game gambling machines was traveling on Interstate 74 when he lost control and crashed. Two other cars were involved in the accident as well, but no one was seriously injured.

The accident caused serious damage to the courier’s vehicle which resulted in loads of cash being released into the atmosphere. The aftermath shows a highway covered in greenbacks and State Troopers scrambling to clean it up before the winds took it far far away.

Even though all cars involved ended up off the highway, officials still closed down the road for an hour to allow for proper cleanup. State Troopers told St. Louis-Post dispatch that all the money was recovered, which is amazing considering the amount of cash and how far it spread from the scene of the accident. The courier driver was charged with driving too fast for conditions, and one of the drivers he hit was charged with driving while their license is revoked and operating a motor vehicle without insurance.