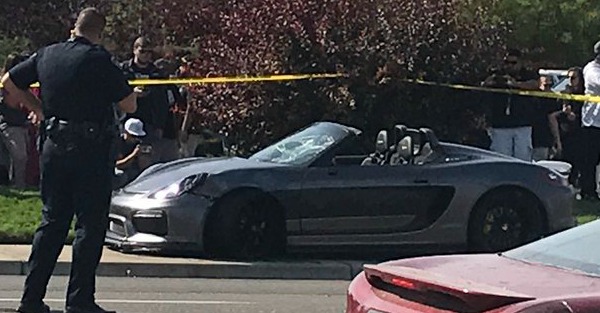 Local Idaho news channel KTVB said that 11 people were reported injured when a Porsche driver did what we have all come to expect from certain kinds of idiots leaving a car meet.

Windshield of car looks smashed in. Crash on Overland in front of Edwards 21 pic.twitter.com/OxyGHZJQHV

Leaving a Cars and Coffee event in Boise, Idaho, the driver of this Porsche lost control and mounted a curb and crashed into a group of people.

The setup was a familiar one, a turn onto a straight section of road with bystanders taking video of cars leaving the meet. Some people just can’t control themselves in these situations and let their cars get away from them.

Warning: The video of the incident is graphic.

Boise Police Lt. Charles Lebar said, “I have no doubt that the driver did not intend to do what he did, but that is an unfortunate consequence of reckless driving.”

None of the injuries were reported to be critical.

It is idiots like this that make the hundreds of enthusiasts who just want to hang out and check out some cool cars look bad.

Related: Add the Dodge Viper to the list of cars to avoid at Cars and Coffee