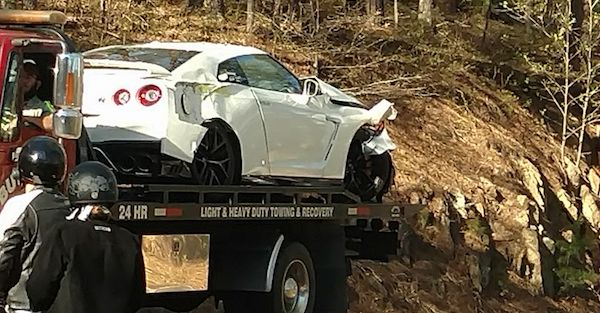 Let’s take a moment to talk about cornering, mainly how not to do it. There’s one rule that seems pretty easy to remember: don’t try to touch the street with your gas pedal at the apex of the turn. Just don’t do it.

Here we see a prime example of how to ruin a brand new 2017 GTR. Take a look at the aftermath: It isn’t pretty. At first you might be inclined to feel kind of bad for the driver. Clearly it’s some rich dude who got a little too excited when he saw a camera on the side of the road and decided to test the Dragon. That is, you might feel bad for him until you read his frantically-typed excuse for why he crashed. Spoiler! It totally wasn’t his fault. Huh.

Apparently Knoxville not only suffers from a lack of 5-star hotels, edgy nightclubs, and the right kind of “community support structure” for this totally not-at-all entitled, arrogant wannabe street racer and his friends, but it also has roads that are too narrow! The nerve of the Tennessee Department of Transportation. Shame on you, John Schroer! A pox upon your house!

Knoxville’s awful infrastructure is likely only going to get worse too. Because GTR-bro and his buds were the only things funding the entire city, and you can be sure that these guys aren’t ever coming back to a place without high-end amenities.