Two angry drivers get into a fight on the track, and when police get involved, one gets tasered 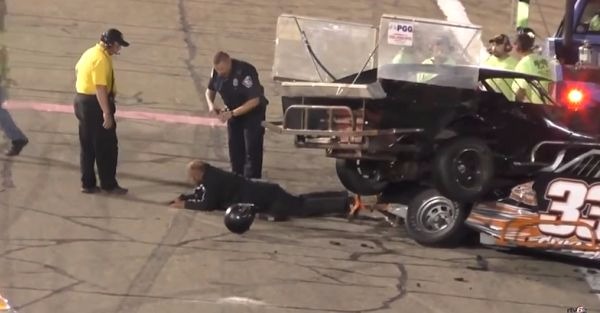 When fans bought their tickets for the Oct. 14th races at Anderson Speedway, they probably didn’t expect to witness two drivers get arrested and hauled off to jail.

But, that’s exactly what happened after two drivers collided one too many times during a figure-8 race at the Indiana track.

The drama reached its pinnacle after the No. 33 car piloted by Shawn Cullen hit the back of Jeffrey Swinford’s black car, sending his vehicle into the grass.

Frustrated by the collision, Swinford turned around and drove close to Cullen’s car, then shouted at him before Swinford actually drove his car on top of the hood of Cullen’s machine.

As you might expect, Cullen wasn’t exactly thrilled with Swinford for destroying his automobile, so he jumped out, ran over to the driver’s side window of Swinford’s ride, and began unloading a series of punches on his competitor.

That’s when a police officer stepped in and tased Cullen before placing him in handcuffs.

Both drivers were arrested and taken to the Madison County Jail, according to a report by The Herald Bulletin.

Cullen, 42, was charged with a Class B misdemeanor of disorderly conduct and the 40-year-old Swinford earned a Class A misdemeanor of criminal recklessness. However, Swinford posted $3,000 bond and was released the following morning.

The owner of Anderson Speedway, Rick Dawson, told The Herald Bulletin that “Swinford will not race at this racetrack as long as I own it, and I plan to own it for a long time.”

Video of this incident can be seen in the embedded video at the top of this page. It’s earned more than 30,000 views on YouTube in just one week.